Couple Reunites With Motorcycle They Used to Elope 60 Years Ago

Toronto Stunters Wheelie Next to Police

A teen couple who ran away sixty years ago to elope to Scotland have bought back the motorcycle they used to flee their disapproving parents.

When Jean and Bob Smith first met, they fell in love almost immediately. They knew they wanted to spend the rest of their lives together. Unfortunately, their parents felt otherwise, believing the the young couple to be too young to wed.

Bob and Jean wouldn’t hear any of it though. Instead of heeding their parents’ concerns, they bought a motorcycle and eloped in Scotland. They made the two day, 600 mile journey aboard a 1947 Royal Enfield Flying Flea. 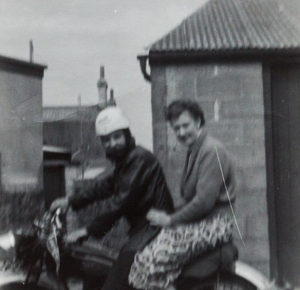 Bob and Jean on the motorcycle in 1957. (Image via Daily Mail)

The couple sold the motorcycle a few years later to help pay bills.

When they escaped their parents’ disapproval, Bob was 19 and Jean was just 17. Now, in 2016, sixty years, three children, ten grandchildren, and seven great-grandchildren later, the couple remains a tight unit. Bob recently stumbled upon a motorcycle that resembled the one he and Jean ran away on. He bought it, only to soon discover a forgotten love note that had remained in the crank shaft. Amazingly, it was the same motorcycle they used to transport them to their then-frowned-upon nuptials.

“I could not believe it. It had both our names on and the year and place we were married. It said “This bike made our love possible,” Jean told the Daily Mail.

Love is priceless, but motorcycles of course cost money. Bob originally bought his Royal Enfield for £22. It is currently valued at £5,000.

The couple’s reunion with the motorcycle reaffirmed their passion and love. “We are just as in love as the day we married. I could not do without him,”  said Jean. They recently celebrated their diamond anniversary. 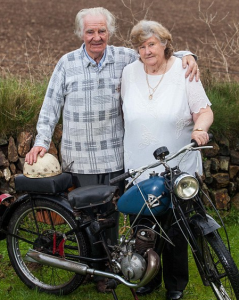 2016 and reunited with their escape vehicle. (Image via Daily Mail)