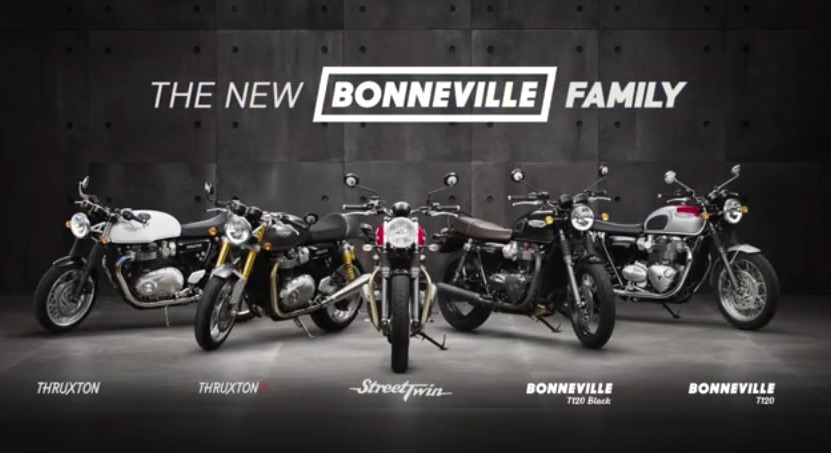 They teased us, and now Triumph has followed through on its provocation:

The new line of Bonneville motorcycles has officially been announced and the first wave of responses seems excited and optimistic. The brand has remained true to its roots as a classic cafe racer design while revamping and thoroughly upgrading its engineering and design. Since the Triumph Bonneville bikes have remained virtually unchanged since 2001 (when the first modern reinvention of the iconic 1960s classic was released) , they had plenty of time to make the perfect tweaks to reinvent the classic and improve upon it by listening to the years of consumer feedback. But this also increased the pressure– if they were going to reboot the Bonneville, they had to reboot it right.

The new Bonnies are much larger than the original 1960s design (as the majority of today’s bikes are), but the designers took steps to simplify and streamline the design, making the bike visually slicker than the 2001 model. They managed to maintain a similar silhouette while completely revamping the design of the bikes’ bases.

One of the brilliant designs the Triumph designers came up with to balance performance with design is the switch to water-cooled engines. They are heavily finned as if they were air-cooled. The fins provide some additional cooling properties, which allows the engine to be more compact. The overall look is straightforward but eye-catching.

Increased torque was a key focus for the designers of the new Bonnies. They understood that many Triumph fans had stuck with the brand out of loyalty to its classic design and wanted to invigorate the new models with  a dose of the performance that Bonnies were once famed for. The Street Twin (the least expensive of the new models) has a 900 cc engine, while the others boast a 1200 cc engine.  Torque was a priority; the 900 cc will have around  60 pounds of torque while the larger 1200 cc will have 77 foot pounds. The radiator is unadorned, and the piping is minimal and stark.

The chassis has also been redone and each of the five models will have a different underbelly specially designed for its capabilities.

Those who cherish the customization tradition of the Bonneville need not worry. Triumph says a 470-page accessory catalog will be released as well, so the new Bonneville will remain supremely customizable. The bikes should be available for purchase early next year.