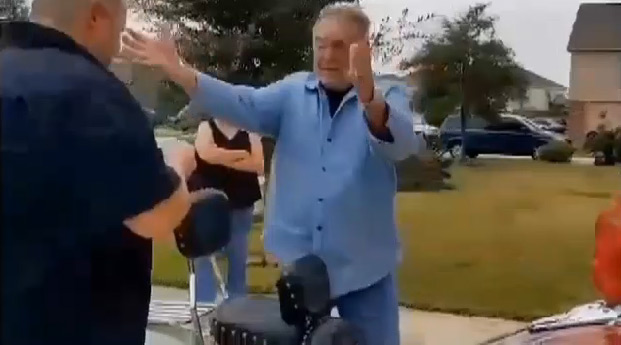 George Johnsen and his son were the perhaps unlikely subjects of a tear-jerking video that gained popularity after being shared on Facebook. The 69-year-old Vietnam combat veteran was caught on camera after his son Scott Harmen surprised him with a refurbished and highly personal customized motorcycle.

A month prior to the surprise, Mr. Harmen had taken Mr. Johnsen’s motorcycle to get some alleged repairs. Harmen, it turned out, had much greater plans for his dad’s 2003 Honda VTX 1800 R. Once he had the bike in his custody, he took it upon himself to transform the motorbike into an art object on wheels that pays tribute to his father’s military service.

Harmen had an artist friend paint various images on the motorcycle that represent Johnsen’s time in the military. The bike is now emblazoned with an “Airborne” logo as well as an image of soldiers in Vietnam. The refurbished bike now boasts custom pipes and handlebars in addition to its unique paint job.

“I can’t find the words… oh my God,”  Johnsen tearfully uttered upon seeing the motorcycle. After gathering himself a little, while reaching over to embrace his son, Mr. Johnsen can be heard saying, “I must have done something right to have a son like you.”

“I’m a Harley lover but I have owned several metrics in the past but I’m not a Harley snob so I wave or give you a head nod as long as you are on two wheels (sometimes 3). I hijacked my dad’s 03 VTX 1800R a month ago and told him I was going to do some work to it but didn’t tell him what I was doing. He will be 69 yrs old on the 27th. He was an Airborne Ranger in Vietnam so I wanted to do a tribute to him. I had my airbrusher work some magic for me and then I installed a V&H exhaust and some 1.5″ drag bars that were donated by fellow member, combat vet & now great friend Jeremy Worth. Merry Christmas George S. Johnsen dad, I love ya!”